Kweli Tutashina, responding to a Son House posting I did on a blog, asks me if I was hip to Ghasem Batamuntu, a West Coast saxophonist, band leader, and creative artist/organizer originally from Oakland but now based in The Netherlands. I had not heard him.

I started searching and eventually bought his one available recording, A Gift From Trane. As my man Kweli well knew, Batamuntu’s music has my name all over it. The composition “Yellow Moon” features Los Angeles poet Kamau Daaood, who is a good friend and comrade. Kamau and I have performed together in New York, Atlanta, and, of course, L.A.

I also tracked down Batamuntu’s website that has four tracks for listening. I include the selection titled “Track 08” on the Mixtape.

Although the West Coast in general and both the Bay Area and L.A., aka La-La Land are usually characterized as multi-cultural melting pots, there is also a strong Afro-Centric music community. And by Afro-Centric I don’t mean Jim Crow, or Crow Jim, or any other kind of racial exclusivity but I do mean a strong emphasis on African-heritage culture and aesthetics, especially high-powered jazz. After all San Francisco is home to the Coltrane Church. Jazz stylings that originated in the sixties still flourishes even if recordings are few and media coverage near nil.

Additionally, there is a strong metaphysical modality at work side by side with aesthetic concerns about spirituality and cosmic orientations.

I am deeply impressed by the ensemble work. Batamuntu is a good composer, a strong woodwind soloist and he really excels as a visionary bandleader. The twenty-plus minutes of “Track 08” reveal an orchestral sweep and musical depth completely lacking on the majority of today’s contemporary jazz recordings.

Assembling a big band is no small feat, and to get them to play at the levels manifested on these selections is astounding. Unless we hit the lottery or have a huge stash of money, some secret endowment, or a hefty trust fund (and I’m pretty sure none of that is the case for Ghasem) most of us wouldn’t even think of taking on the task of putting together a huge production like this. What Ghasem Batamuntu has done is the hard work of organizing people to work together out of love for the music and a commitment to progressive sounds. There is nothing here aimed at BET, MTV or any other mainstream corporate entity. This is music to liberate the mind and sustain an anti-establishment spirit of resistance.

BTW, in this case the “people” working with Ghasem is more than solely the musicians. The people also includes an independent record company who is willing to front-in the production costs and who probably will not be able to sell enough records to recoup the initial investment. Part of the way Ghasem’s kind of music is kept out of the mainstream is by the production and marketing costs being so high and mainstream media being reluctant to even publicize the existence of the music. Yes, it’s an uphill struggle but when the music is this beautiful, struggle we must. Kudos to both Ghasem and Tahoe Records.

What I particularly appreciate about this recording is both the sophistication and the high professionalism of the ensemble. And, of equal if not greater importance, this is not just an assemblage of technicians reading tricky charts. Listen to the solos, they are wonderful. Special note to flautist Dadisi Komolafe who is the strongest I have heard on flute since Eric Dolphy. A number of the ensemble players are alumni of Horace Tapscott’s Pan Afrikan Arkestra, and my man Sunship Theus is ‘the’ West Coast trap drummer/percussion monster. Plus, I’ve got to at least mention keyboard maestro Nate Morgan Jr., smoking trombonist Charles Hamilton, and poet deserving of mucho recognition, K. Curtis Lyle (on “Nu Finitude, for Kwa Kwa”).

Hopefully A Gift From Trane will attract more attention and resources to Ghasem Batamuntu. He could use at least two more recordings, and if nothing else make available the four tracks from his website.

So that’s it. Check out this beautiful music. Ghasem Batamuntu is a great find for anybody and everybody to be turned on to. This is invigorating and joyous music. Spread the word, share the beauty.

—written by: Kalamu ya Salaam 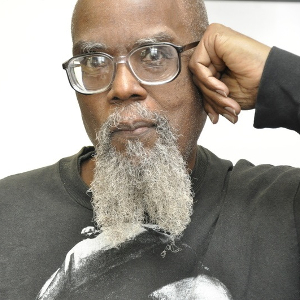 Ghasem Batamuntu is not a jazz artist. He is seen so much by many, so that a label can be stuck on his forehead. Jazz is certainly an important part of his history and musical identity, and that is why this label is not chosen that much. More preferably, however, the saxophonist is defined as a ‘multimedia performer’ .

Batamuntu’s performances are always an experience. He involves a large amount of ethnic cultures, musical cultures, arts and media forms in his shows. It is right that the designation of only the musical genre of jazz does not compromise its cultural versatility . In the Bimhuis, slow motion films of moving bodies were projected onto a gigantic curtaingraphic forms or a traveling ray; during the second set, it was mainly impressions of Miles Davis. The audience heard completely different instruments ranging from a hammond to Brazilian percussion, from a flute to West African percussion and from tabla drums to the Japanese Sho flute (with electronic effects). There was also a soul singer, rapper, poet and a dancer. Batamuntu organized an orgy of art forms and knew how to create a unity in an admirable way.

‘You only come to the truth through the combination of different media and cultureswhich is withheld due to many restrictions imposed on the business world, ‘says Batamuntu. By means of multimedia projects such as these, you break through the curse of the limitations. Whether a hallelujah mood arose or people began to see the light in the Bimhuis is a bit exaggerated; The fact is that the meeting resulted in a fascinating performance. If every artist, with whatever background, has something interesting to say, something exciting must arise. Especially when the conductor Batamuntu has a clear vision about the organization of documents.

From poems from Will Alexander, the conductor led the company in a structured way to good teamwork and interactions. Each composition was written down, but Batamuntu was mainly seduced by the atmosphere, surprising sounds or the video images. Especially during the first track, he constantly searched for new sounds with his eyes to then get a hold of an impressive amount of mostly African instruments on the tables next to him, or by instructing others to make musical contributions. Ghasem Batamuntu and poet Will Alexander An often hypnotizing came about

whole, that was interspersed with nice funk. Bass player Johnny Satisfied played very tightly during the stirring pieces. Combined with the fierce outliers of percussionists Louise Perillo and Mamur Seck and the tears of guitarist Franky Douglas , a wonderfully spherical unity emerged. The first set, no less than 130 minutes long, consisted mainly of compositions by Batamuntu. The second set was dedicated to Miles Davis ; the trumpet player’s pieces formed the basis of accessible, danceable music. ‘My Ship’, sung by Raffaëlla Herbert, was a highlight. Sometimes Batamuntu mainly made trips to free jazz ; he once again jammed with Pharoah Sanders and Archie Shepp.

Cultural and art pollination is not something new . You only see it little; certainly not in a large format like ‘Ghasem Batamuntu and the MPAC Factor -E-‘. It was a pity that it was not particularly busy; Batamuntu was also visibly disappointed. It certainly became a party; his daughter, who was three years old, celebrated the entire second set dancing on the stage.

The Mars Bar and Grill...The Place Where Space Is

A Gift from Trane for Jackie 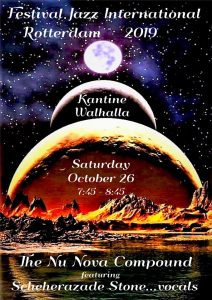